Wives, Sisters, and Daughters: Henry Woodcock’s Correspondence with the Women in his Life

Lucy wrote this letter after the death of her father, and, unsurprisingly, she uses it to share her deep grief with Henry. However, pay attention to her discussion of the new steamship route in the sixth paragraph, and what its place in the letter says about her relationship to Henry and her reaction to grief. 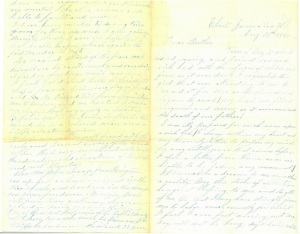 Yours of May 18th came to hand Wed evening and found me on a sick bed [sic], with the return of chills and fever.1 as it was dusk I requested the girl that was attending to me to read it for me.2 as she opened and began to read my heart was filled anguish and sorrow as it announced the death of our father.

I was illy prepared for such news upon a sick bed. I always within my heart ask my heavenly Father to prepare my mind for any intillegence [sic] that comes before I open a letter from Home, as we are liable to be taken any moment. It seems like a dream to me more than a reality. May this stroke of affliction be a great blessing to me and to all of us, Oh that I may have strength given me to labor more earnestly for Christ. I feel I am fast wearing out my days will not be long. My [May] I labor while they do last for this once oppressed-people. I was [inserted below line: x] [added above line: glad] to know that you all were able to be gathered around the grave of those we love and especialy [sic] our parents [sic].

We as a family have been spared these Many years to go out and come in to [inserted in margin: greet] each other face to face, but it is so no more. I did want to come home this year but Mr Whipple3 was not quite willing. as long as I was able to continue my work and as my health was quite good he wished I should wait a while longer as many were leaving the Mission. If I had gone I should not have got home until the last of May or the first of June. 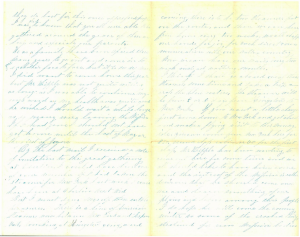 But I must deny myself these earthly pleasures. There is a line of American Steamers now between New York and Aspen Hall, touching, at Kingston going, and coming, there is to be two steamers put on the route, and then we can hear from home every two weeks. we all clapp[sic] our hands for joy, for such direct communication with our native country Now we can have our mails every two weeks instead [sic] waiting months.

I think I shall go aboard one of these steamers some time and take a trip across the blue waters. The steamer will be from 5 or 6 days from Kingston to New York. If you want a little change just come down to New York and get abord [sic] and make a flying visit to this sunny isle. you can come from New York here for $50, second class cabin or 60 for the first class. Mr Whipple has been wanting to come out here for some time and we all should like to have him come and the interest of the Mission is rather desirous that he should come and see and learn something of our plans and labors among this people. I do hope he will come the coming winter so some of the crooked things stratened [straightened] for even Mission ladies have some crooked things- Missionaries are mortal like other men- and liable to faults and errors _

I have been unable to do any thing of any for these six weeks. I am gaining strength slowly. I am in hopes that I shall be able to open school again the first Monday in sept.

My second attack of the fever was brought on by excitement and overdoing at our Aug meetings which was here. I took hold and help to trim the chapel for our Aniversary [sic] day of freedom5 and Mr Mr Richard Hill6 from Spanishtowne [sic] was to be here and we wanted to make our chapel look comely as possible. Mr Hill is next to the Govener [sic]7 in office in the island. he is a colored man and a highly educated man.

There is no one so well versed with the early and present history of the island as he_  [sic] He is very much interested in the education and elevation of the people and not the planters.8

1As Lucy mentions, this illness appears to have been quite serious. Several earlier letters from Loren Thompson to Henry Woodcock describe how he and his wife have been caring for Lucy, and state that she has been too weak to write Henry herself. Another missionary, Sarah Penfield, also mentions Lucy’s illness in one of her letters to her mother slightly later in the fall, and she too seems rather concerned. Based on Loren’s letters, which describe Lucy’s illness as an “ague” and state that she took quinine, she probably contracted malaria (Charles G. Gosselink, Sarah Corban Ingraham Penfield, and Thornton Bigelow Penfield, Letters from Jamaica: 1858-1866: Thornton Bigelow Penfield, Sarah Ingraham Penfield. Silver Bay, N.Y.: Boat House Books, 2005, p. 97).

2This may be Jane, the girl Lucy later adopted, who married John McLeod (see 1876 letter).

3George Whipple was the foreign corresponding secretary for the American Missionary Association, which was Lucy’s association. He had previously worked at Oberlin College and was personal friends with both Charles Finney and Asa Mahan, both Presidents of the College (Gale L. Kenny, Contentious Liberties:  American Abolitionists in Post-Emancipation Jamaica, 1834-1866. Race in Atlantic World 1700-1900. Athens, GA: University of Georgia Press, 2010, 100-105).

4Possibly referring to convocation, which is referenced in other of Henry and Lucy’s letters, but also could have been something to do with abolition, which Lucy and her brother both supported (Oberlin College Archives, Henry Edwin Woodcock Collection).

5Referring to the date of the British Slavery Abolition Act of 1833, which freed all the slaves in their territories. The Act was implemented on August 1st, 1834, which is the date that Lucy was celebrating.

6Richard Hill (b. 1 May 1795, d. 28 September 1872) was a remarkable figure. Born in Montego Bay, Jamaica, to free parents, he was educated in England, and returned to Jamaica in 1818 on the death of his father. A fervent advocate for civil rights, he petitioned the British House of Commons for freedom on behalf of Jamaican anti-slavery activists in 1827. He held various political offices in Jamaica, and was the head of the Special Magistrates that oversaw disputes between newly freed slaves and former masters. He wrote prolifically throughout his life on a variety of topics, ranging from abolition to the arts and sciences. Among other disciplines, he studied botany, and his work saved lives during a cholera outbreak in 1851. He corresponded with many notables of the day, including Charles Darwin (Frank Cundall, “Richard Hill.” Journal of Negro History 5, no. 1 (01/1920, 1920): 37-44).

8Planters here is likely a reference to the plantation owners who would have been the island’s elite, or former elite due to the end of slavery, at the time.

9John Savage was the Inspector of School for Jamaica in 1871. (Frank, Cundall, “Merrick’s Charity.” In The Handbook of Jamaica for …: Comprising Historical, Statistical and General Information Concerning the Island Compiled from Official and Other Reliable Records, 331-332. Cornell University: Government Print, 1893, 331).

10The Mico school was a part of a series of schools established by the Lady Mico trust to train teachers and educate the children of former slaves in British Colonies. The oldest of the teaching institutes was established in Kingston, Jamaica in 1835. (“The Mico University College: The Mico History,” web address, accessed March 17th, 2015).

12James Mursell Phillippo (b.1798- d.1879) was born in England and educated there. He preached in Jamaica from 1823 to 1831, when he was forced to return to England due to ill health. While in England, he became actively involved in the anti-slavery movement and returned to Jamaica immediately following emancipation in 1834. He was a staunch critic of Jamaica’s apprenticeship system for former slaves, whereby slaves would become the apprentices of their former masters, which often failed to improve their lives (this was the same system that Richard Hill oversaw as Special Magistrate). On his own, Phillippo purchased land which he used to create a number of free townships for former slave families. He died in Spanishtown, Jamaica, at the age of 81 (Anderson, Biographical Dictionary of Christian Missions, 534).